The history of Pagialla is very old, we do not know clearly how much, but certainly has its roots in very distant eras. The first documents relative to this place, known as Santa Maria di Pagialla (or Santa Maria di Nives) are the church records of births and deaths kept in the municipal archives dated back to 1577 but Pagialla was in ancient times, like other churches scattered between the valleys and hills of Umbria, a reference along the Templar roads to the Adriatic Sea. The church of Santa Maria di Pagialla is cited in Templar paths of the thirteenth century, but it is possible that its origins are even more remote. 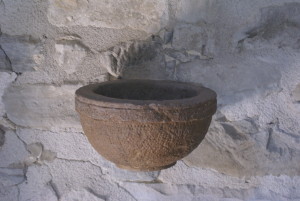 Having survived the centuries the church was seriously damaged by the earthquake that struck Umbria in 1984. Since then it was never used as unsafe and not fit for use.

After Shri Babaji Mahasamadhi at Haidakhan in 1984, Raidas and Daniela back to Italy began looking for a place to settle and their research focused in Umbria, a land that has always welcomed spiritual practitioners of all faiths. After weeks of searching they had the opportunity to visit Pagialla; they were impressed by the beauty and the sanctity of the site and despite the precarious condition of the building and the difficulties caused by the isolation and the harshness of the place, with the availability of the Episcopal Curia to hand it over, they concluded the purchase.

The condition of the church and the adjoining house were very critical. There was no water available if not collecting it from a torrent down the hill. Initially they settled in a prefabricated house and stone by stone, they worked together to clean the house and the church, then began to celebrate regularly arati and puja to Shri Babaji. A havan kund was built for the celebration of fire ceremonies.

After short time, other devotees began arriving to help with karma yoga, donations and devotion to make this place more beautiful and welcoming.
During the tour in Europe in 1988 and 1990 Shri Muniraj and Shri Vishnu Datt Shastri visited and blessed Pagialla with their presence along with dozens and dozens of people from all over the world. Later Shri Muniraj visited Pagialla also in 1992 and 1996.

In 1988 was inaugurated the temple and performed ceremonies for the location of the deities of the temple. Shri Muniraj and Shri Shastriji have officiated puja and havan in the days of their stay and poured endless blessings to this place and all those who had helped to make it happen. 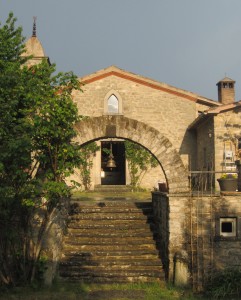 Bhole Baba Jñana Ashram is the name that Shri Muniraj gave the ashram of Pagialla.

Since then and to this day many venerable Masters, researchers of the divine, yoga practitioners, people of every creed and tradition in search of peace and inner growth have found hospitality at Bhole Baba Jñana Ashram in Pagialla.